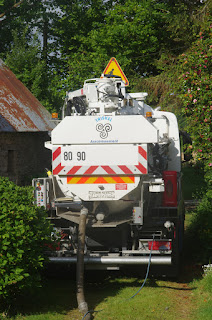 For those who don't know, those who haven't enjoyed or endured the experience - having your fosse septique emptied gives you a feeling akin to filling your car's fuel tank to the brim after you've been inexplicably and continually driving past petrol stations when you know you are running on fumes (Never done it? - I'm not sure I can wholeheartedly believe you). "Let's be daring and pass just one more garage"... and then, when you succumb... that strange euphoria.  Yeh! That about sums it up... That sense of freedom. Facing the open road again with relaxation and the confidence that nothing can stop you now!
When it comes to the emptying of your fosse the rehearsals of the conversation you are going to have when you telephone to book the appointment for the 'sludge gulper' to roll up are all worth it. Fora start there's the language barrier and the esoterics of it all. Although, when you hang up the phone... because it was in fact so simple, you wonder whether they will actually turn up! It's the numbers in a foreign language that make you doubt yourself. The fact that the French bunch them up in pairs whereas I am used only to remembering and delivering them one at a time... I know - pathetic! And, being on the phone, rather than being there in person there is no opportunity to resort to sign language... the flapping of the arms or generally gesticulating in what afterwards seems like a rather pathetic pursuit and looking quite ridiculous - like some giant erratic scratting chicken. Even toward the end of the conversation, when it was almost 'in the bag' I had to hand the phone over to Micki because the poor girl at the fosse company asked me a question just a little too quickly for my tardy, slow to respond, 'English only' brain to grasp. It was just to say that they would call back after lunch to confirm the day and time... Damn it! I am getting there but - inside - when one half my brain confidently opens my mouth the other half just splurges a random stream of unintelligible ectoplasmic nonsense! Ah well... maybe next time... 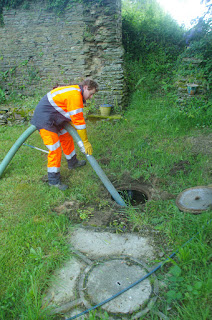 Maybe even deciding to write a blog about something as mundane as fosse emptying may seem odd to the average mains drainage devotee or even a regular septic tank full time house dweller - one who is resident all of the time... but - we have a house in Brittany which gets just sporadic use and which, at visits of just 2 weeks out of every 8, means that in 17 years we had spent many a visit over the last couple of years wondering just how close our last visit to the loo would be to being the last one that the system could actually cope with!!! How far away, or how near still, whilst you are sitting on the throne, is your last poo? I have to say that we had got it spectacularly right - I reckon there was just room for say 20 further visits to the loo before it would have begun to travel back up the tube toward the house...Yes, quite! Great timing! (apologies to the more sensitive reader).

Turn up? Well they, or rather he... did! A nice very cleanly turned out young man... Mind you we were the first call of the day. Bang on time and with a truck that leaves one in absolutely no doubt that they were the right people to call in and that they can definitely cope with all eventualities.  In fact their truck was too large for the entrance to our drive and several boughs and branches had to be sawn from the trees along the drive in order to squeeze the leviathan through the gap. Affable young man whose procedure was measured and methodical as he went through his set pieces... from donning his 'zoot-suit' overalls and full face helmet... until he waved us goodbye he was very disciplined. His truck, having been deftly reverse through the very narrow gap between lane and courtyard, stopped just short of the telephone cable  which hung perilously close to the hatches on the tanker top. which meant that he had to stop short of the fosse around 30 metres. Pierre carefully stepped out the distance (reminiscent of Basil Fawlty in full flow) from the back of his truck to the septic tank and the filter chamber and then walked back grinning whilst holding thumb and forefinger only slightly apart and saying..."juste ce beaucoup à épargner" which I guessed was 'just enough'. And so with confidence he proceeded to unravel 5 or 6 chunky looking corrugated tubes which, when  screwed, clamped and locked together neatly connected with the business end of the siphon tube already laid by the open subterranean tank. Just a few centimetres to spare... "Parfait!" He said.
He pressed a button on the rear of the truck and it triggered a noise like a Jumbo jet taxi-ing for take-off which filled the courtyard and a triangular warning sign raised itself swiftly and eased itself into position just nudging the telephone cable out of the way suggesting that Pierre was right to stop the truck exactly where he did. 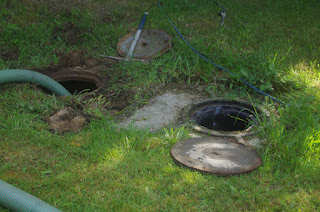 Ten minutes of great sucking force and then, apart from some very handy cleaning up of our volcanic rock filled filter basket with an industrial sized pressure washer, he was done! He spent around as long divesting himself of his protective clothing, hosing each piece as he removed it... gauntlet, boots and overalls... So, back in his now lighter weight and impeccable uniform, he proffered his clipboard with his facture and delivered his parting shot... I have no doubt he learned this especially for the UK owner's abroad market... He held his forefinger to the side of his mouth coughed gently and said "I see that you only use white toilet paper!" We laughed on cue and I said... "Let's make sure we don't leave it for another 17 years until the next time!" 174 Euros well spent - And, when you have it done, as we did, after 15 years it works out to just to €11.60 each year... Bargain!! 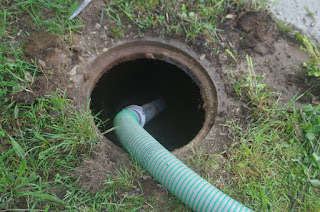 So glad to be back in Brittany in one piece... he built a chapel. 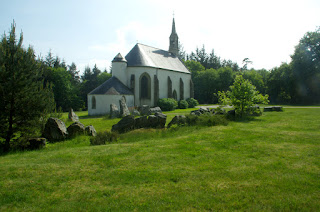 298 metres above sea level may not seem that high in the overall scale of mountain peaks but that's where, in 1380 a local Knight with his home at Le Quillio ('crest' in Celtic) in the Cotes d'Armor, had decided he would build a homage... the first Chapel of St Lorette. The spot had previously been used as a burial site in Neolithic times (10,200BC) and is marked by 28 stones… There must be some significance in that the stones in a line to the North are of white Quartz and those to the south are of schist or slate.

So it was that in the 14th Century a then Count of Uzel (a hilltop village, 6km from our house in Brittany) who significantly became Constable and leader of the armies of the King of France (top job) was fighting in Italy and was close to Ancona where the original chapel to Our Lady of Lorette is sited… He vowed, at this his darkest moment, that if he survived and won through during this, his worst ordeal, that he would build a chapel at the highest point on his land and dedicate it to Our Lady of Lorette… He and his men must have pulled through because here is the current chapel. It's setting is stunning and the views are spectacular :- the chapel sits amidst pine trees next to the Neolithic burial stones. Modern accoutrements of picnic benches do not detract from the serene atmosphere that is quite palpable. 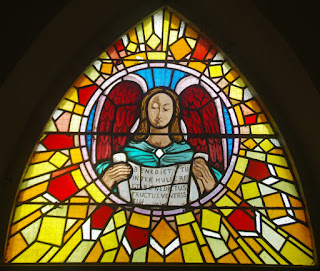 In 1854 the local town council decided that the original chapel was in too bad a state of repair to be restored adequately and should be replaced by a new building. A shame they didn't leave the ruin for all to see and build the new one as a neihbour. Although it seems unlikely, because of its hilltop position, the site is in fact a natural area for the catchment of rainwater and feeds several springs further down the slopes that shelve away from the site. One spring, about a quarter mile down the hill and within sight of the chapel down a straight lane, wooded on each side, is capped with an ornate monument dedicated to Our Lady of Lorette. The water is considered miraculous. Micki dipped her hands in the water and was immediately relieved of a' locked' finger which for years clicked in and out of place each time she opened and closed her hand. That was a moment of amazement. Unfortunately it was back to normal the following day… So filling a few bottles might be an option. The waters have been specifically noted for the relief of ear infections and hearing problems. "Sorry?… What was that?

If you're passing and are in need of a cure... (to be honest just being up there makes you feel good) then traveling through Le Quillio from east to west toward Mur de Bretagne… pass the 'end of the village' sign… (Its name with a cross through it) then keep a look out for a right turn up the hill which is signposted  "ND d'Lorette"… follow the signs until the ornate well monument appears on your left… the turning for the chapel is immediately opposite - to the right. There is random parking amongst the tress… nothing formal and on the occasions we have been there we have been virtually alone… Enchanting. The chapel is open with some very attractive stained glass windows. It is a place of noticeable calm. And it appears to be well supported by the local community.

Note:- For those who don't know, across France there is a custom of communities, centering on their local church of course, supporting outlying chapels via the holding of 'Pardons'. The day often begins with a baptism or two…Local farmers donate the food for the communal meal (a friend calls them pig & potato functions)… but it's a 4 course meal with coffee to follow and plenty of wine And the long lunch is often followed by typical village fete attractions. Villagers pay 10 Euros each… Everyone has a good day out, a hearty lunch with good conversation and the chapels have their maintenance funds for another year… Voila!
at June 13, 2016 No comments: