Is A House in Brittany a Good Investment? 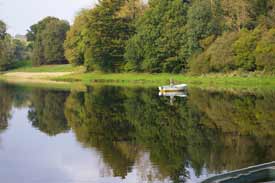 ....You bet it is!..
I'm starting 2016's posts off with a quick appraisal of a few properties that show what a stonking investment a house in Brittany can be... according, of course, to what sort of buyer you are... Don't be insulted, but some people are just nutters (in fact this is the category I probably fall into myself)... We, that's Micki and myself, in 1999, bought a dream of a house for just 12,000 of our English pounds (plus Notaire's fees of course). I know - amazing isn't it! We have since proceeded to visit the house 6 times each year for around two weeks each trip and, up to this point, never spent any more time than this over there together. On two or three occasions I have spent a few weeks more than that over at the house when major works were on the agenda - such as when two rooves were replaced... bathrooms created from scratch; including floors, walls, wiring (there's one bloody light fitting still doesn't work properly) plumbing etc., and an emergency kitchen (year 2000) which unfortunately ("maybe next time" is my mantra) is still in use have made longer stints essential.

But (you see I've already digressed)... the point is that today it would sell (if we wanted to let it go) for around maybe £150,000). If we had been speedier in our renovation/restoration, it could have been earning us a tidy sum in gite rental. Forget that neither of these have been the eventuality... either would have shown us a tidy profit so "Yes' a purchase such as our own would have been a great investment... And anyway we do enjoy our trips to the house - especially those in Spring, Summer and Autumn. Winter? Well a trip in January this year was miserable because cold, wet, quagmire goes to make a combination that is downright opinion forming shite (excuse me).

Of course if you are the second kind of buyer... one who has had that 'renovator gene' burnt from your brain and all you want to do is walk in flick the heating and the kettle on - sit down and watch TV., then you are obviously going to pay substantially more for whatever you buy... But then again you will also get much more back... You can be giting and reaping an income before you can say 'underfloor heating' (now there's something I wish I'd said in the right shop before we laid tiles on the ground floor!). 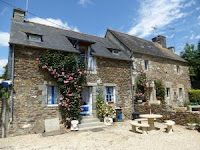 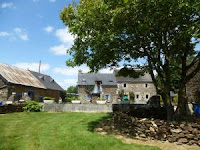 Anyway, friends we made only recently said that they were interested in buying a house in Brittany and we were able to introduce them to one of our agents who had been contracted to sell the property above. They travelled to view and... get this - they have bought two houses (from one vendor) offered in one lot on a private courtyard... One house has three bedrooms the second two. They share 3,000 square metres of land (3/4 acre). By the gates leading into the courtyard is a double open fronted stone garage with a loft above... There is a barn with workshop, a summer kitchen - plus a separate outbuilding and another closed garage. After an almost cheeky offer and a very well timed currency exchange, the price of the house distilled down to just £103,000 (that's pounds sterling)... Astounding value for money!... No-one north of the English Channel would argue with that. In fact many are in disbelief... If this property were to be in the Home Counties of England then £750,000 (Iknow, it sounds incredible but the UK property mrket is quite mador even more might not be out of order and here we have an instantly letable pair of gites which might command £350 to £400 a week each between them  from May to September. At the bottom of the garden is a gate which opens onto a path which skirts the wetlands of a 5 kilometre lake which has its own beach and a bar/pizza restaurant... And, even if you get tired of a cook-out on your alfresco summer kitchen and dining area the coast is just a 20 minute drive away, where wide open beaches offer superb sandy beach or craggy cliff-top walks or evenings whiled away over Moules and Frites downed with a beer and they are all just a spontanious 'let's do it' away...  So it's a resounding "YES"... A House in Brittany is a very, very sound investment.
at March 14, 2016 No comments: