A House in Brittany... Buying into a dream... and providing for a rainy day...

Though, of course it NEVER rains in Brittany! But that's probably as true as the one about how it ALWAYS rains in Manchester!

The first thing to say is... we have been very, very lucky with property over the years. I'm not sure that I should carry on buying lottery tickets... because I'm certain we have had a lifetime's luck in the surprisingly few houses that have marked out our lives. In 1999 we bought, in addition to our house in West Sussex, what is known as a 'Corps de Ferme' in Brittany, in the northwest corner of France. We had been on a couple of viewing trips and seen some frightening stuff, some total ruins where a complete rebuild would be the order of the day and, on one occasion, whilst holding on to the local Immobilier's details which showed a reasonably maintained and attractive looking property we drove round and round the village for so long that the locals were gathering and commenting, beginning to point and some even wave each time we passed by... It was only on the ninth circuit of the winding lanes that we realised the house we were looking for had recently parted company with its roof since the agent's photo had been taken. So we drove off slightly deflated to our Chambres d'Hote for the last night before our journey home. The lack of a roof put that house outside our comfort zone from a level of renovations point of view, although at £9,000 it did tempt someone else just a few days later!

But little did we know that Le Ros, our 'Body of the Farm', would fall into our lap on that final night of our third Brittany viewing trip - when bad things, like the lack of a roof or being threatened with a shotgun by a shy and retiring would be vendor (we didn't have an appointment to view) were becoming commonplace so, when our BandB host suggested we go and visit a neighbour (half a mile away) who had just returned from exhibiting at property exhibition in the UK it seemed like a no-brainer... we turned up with wine aplenty and Micki and I curiously earmarked the same three properties from the fifty houses on offer. and one in particular. We should I suppose sign up as contestants on Mr and Mrs. We have always shared the same taste, in fact often would choose to launch into the same subject at the same time with the same point to make... That's what 46 years together will do! 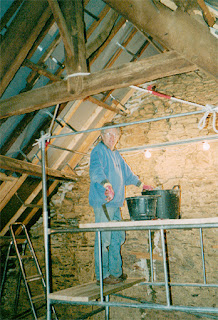 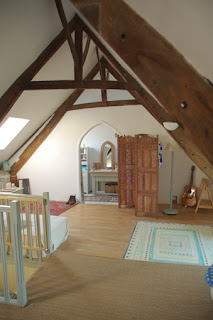 So, at 9am on the following day, we were in the courtyard of an18th Century Farmhouse with 3/4 of an acre of land with three barns, a well and an ancient bread oven. The price of this gem was just £12,000. This was looking like another easy decision. There is little doubt that if this house were to be picked up and dropped in the Home Counties it would not disgrace the pages of Country Life at an asking price of a quarter of a million or more just for the opportunity of developing its potential. Nowadays? The mind boggles - but this is the nature of the economics of cross channel house purchase. Our BandB host had loaned us a large scale map in order that we should find this remote gem more easily and so we felt we should return it as it was on our way back toward the port. Rather than just accept his map Rick encouraged us to play the video we had just shot of the house and, when it came to an end - he said, "so how much is this place?".... "Twelve thousand quid" I said. "So obviously you're going to buy it then!" He pointed to the fax machine... gave me a pen and paper saying - "If you offer the asking price the place is yours". He pointed to the Notaire's fax number on the details (I know... 'fax' - well it was a few year's ago!). So... the fax was sent...

Our ferry crossing home was filled with the most animated stream of conversation of our married life. I'm sure that we didn't really believe that the place was actually going to be ours until - bags unpacked and back at work on the following day, we received a call from the Notaire to put the wheels in motion... con firmation that our offer was accepted, documentation, 10% deposit wired and, then a 3 month gap between signing the Compromis de Vente and the Acte Finale, we were back in Brittany - bank account opened balance transferred signing the paperwork and the place was ours. 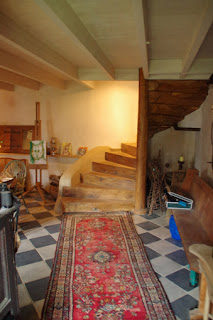 We have now been to-ing and fro-ing between Le Ros and Sussex for 16 years - renovating by stealth rather than speed and we also became involved in the property market a year or so after buying the house... straightening out the buying system for other would-be purchasers of similar bargains - because the systems and means by which it is achieved have changed dramatically since our own haphazard experience. In this day and age, in fact at a certain age it is a good idea to put something away for a rainy day - We have found that by buying a house in Brittany and downsizing in the UK we have been able to do that - augmenting what (low) provision we were able to provide for ourselves in a pension. But are there still bargains in Brittany that, given the passage of time, are still as barmy as our own? Surprisingly... "yes". Admittedly it calls for a close watch on what's becoming available...but certainly there are. Here was one such property...


Two adjoining hamlet houses - one with 3 bedrooms, one with 2, on an exclusive (you have the outside space all to yourselves) enclosed courtyard with two stone garages, a workshop and barn plus an outdoor kitchen for summer dining with a 3/4 acre garden. It was snapped up after it came in to us from an associate in central Brittany... just an easy woodland stroll from a 5 kilometre lake; a fishing and bird-watching paradise (a back garden gate opens onto a path overlooking the wetlands). It did sound too good to be true.

The price? Well, after an almost cheeky offer and positive currency exchange.... £100,000! Internally both houses are very habitable with heating and up to date wiring and plumbing. At a very attractive extra negotiation were all white goods, some very nice traditional furniture... Oh and a ride on mower and a vintage cider press (sounding more annoying by the minute eh?)... The buyers may need to make your own mark on the decor - but the property can immediately provide an income as two gites, or as your own permanent or holiday home with earnings potential...  A thousand miles nearer to 'comfy-cosy' than Le Ros on the day we took possession. All I can say is... because if the new owners hadn't - then I might have.... is Good hunting!

More Spooky Stuff in Brittany... This time my Mother in Law finally made it out there! 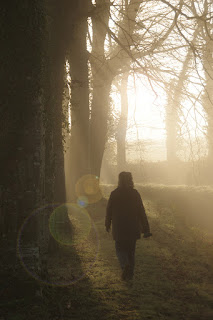 So here's a mystical blog/post from Micki...

My mum never came out to our beautiful farmhouse in Brittany. She always used to say " I’ve been to France” (with the implication that she never wanted to again!)…and would sometimes follow it up with "Anyway...I don't like the French!" at which Chris would often say... "That's great - because neither do the Bretons!" And, to be honest, Brittany is not at all like the rest of France and I think she realised by denying herself trips with us that she had missed out on many things that we are certain she would have loved. We used to regale her with stories of what we were doing, places we had visited and how lovely the lakes, the seaside and all the forests are.

When I was a child we used to live in a wonderful Queen Anne cottage in West Chiltington, in Sussex, with a beautiful garden & paddock and - our house in Brittany has a similar charm, feel and character and a wonderful feeling of peacefulness…. where summers are about hollyhocks, wisteria, where suppers are enjoyed in the garden, barbecues and evening drinks enjoyed in the open air and autumns and winters mean Chestnuts roasting in a pan on the wood-burner and at Christmas time its log fires are pretty perfect... especially when there is snow on the ground outside.

We've always known that Le Ros is blessed with spirits of those passed and the presence of what our Breton neighbour, Jean Noel, calls "Le Fantome!"... so, for it to be a comfortable environment for our own family members - those who have passed over, should be no surprise... 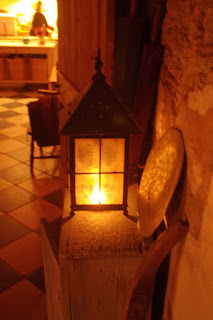 Mum died in April 2015 and not long afterwards we went to Brittany for our usual 2 week stint of renovation, gardening and maintenance - mixed with the attendant relaxation and exploration of general enjoyable stuff. On one day I was totally absorbed in what I was doing.. and felt very relaxed. I went from the lounge through to the dining room/kitchen and suddenly felt very warm - like walking through a greenhouse in the sunlight... whereas Le Ros, inside the house, is hardly ever like that… so warm that I felt my arm and thought that it was odd… turned round and went back and my other arm felt warm… Wondering what was going on, I realised that I was passing mum’s lovely old carriage lamp. The lamp was cool but I was convinced that she was sending me a message.

A few months later (again in Brittany) we had friends round for supper and, after the meal, we all sat in front of the roaring log burner, nicely relaxed and having a glass of wine, music playing quietly in the background - and a easy banter about this and that... when, out of nowhere, something flew across the room and landed at our feet. Sounds quite implausible already, I know. But Chris bent down and retrieved whatever it was that had stopped the conversation so abruptly. It was an open packet of Setlers (antacid tablets).  This might not sound remarkable in itself if you thought that they may have rolled off the table or the mantlepiece for example.... but we don’t use Setlers and did not have any at the house as far as we knew - but, what was remarkable was that before mum died and most often when we used to visit her in the nursing home - on what was to become a virtually daily basis…whenever we asked her what she needed - what she might want the next time we visited... she would only ever say one or other of just a very few things... a lipstick say, or a sausage roll. But almost always she would ask for a packet of Setlers - principally because she didn't enjoy the food in there and knew she would need something to settle her stomach after meals. We did not talk about this phenomenon any more than in passing that evening because our friends were there and probably would not have understood what on earth we were on about or our reaction to it. But, after they left we talked about it at length and became convinced that it was mum’s way of letting us know she was there after all and that she was OK! She was quite mischievous and would have delighted in causing a stir and knowing that we knew she was there too....
Micki Slade 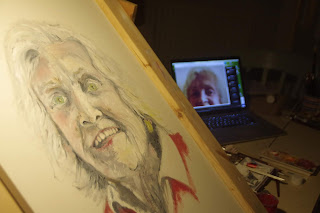