The Rich Religious Patrimony of Brittany 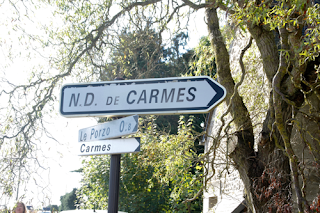 There is a respectful observation of religious heritage in Brittany which is to be admired. I'm not a religious person so, to be honest I don't go scouting too far off the beaten track in the UK... but I've certainly developed a curiosity about the spiritual experiences I've had over the last 15 or 20 years... and I've always been respectful about the religious followings of others... You have to admit there was definitely something going on when these chapels and churches were built with such passion, belief and dedication and back then journeymen; masons, carpenters, heraldic artists, stained glass artists and others...travelled far and wide over their careers as indentured apprentices and adult artisans working on ecclesiastical buildings for the glory of God...and probably, if money ever changed hands, it was far less than the minimum wage!

We took to exploring churches and chapels quite a few years ago. It began when Micki was undertaking a project to explore the heritage of her mum's side of the family... My Mother in Law's cousin, Basil, had been a partner in what became one of the biggest stained glass companies in the UK - Heaton Butler and Bayne...supplying religious glass  not just to the UK but also to the English speaking world... 'the Dominions'... Canada, New Zealand and Australia (we restricted our own tour to Sussex, Hampshire and Kent) and Micki 'got' her certificate and practices as a stained glass artist. 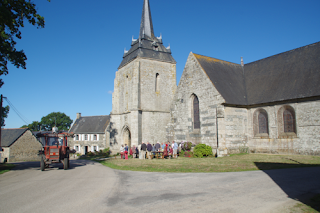 So... the pastime of visiting churches, cathedrals and chapels is a given and we tend to do much more of it in France than in the UK... In fact, when we are cruising the lanes and by-ways of Brittany, if we see a sign that points to a chapel... it's a detour that's guaranteed to add an extra hour to the journey - but time well spent. A few weekends ago was no exception... We had planned just to park by the banks of the Nantes Brest Canal south of Lake Geurledan - have a picnic and walk the dog along the tow-path. That's always great but we decided to turn off the main road a little further south after our walk and found a hamlet called Carmes... A weekend to encourage visits and support for the local chapels had been the weekend before. Somehow this one seems to have enjoyed its special weekend of Patrimony (where every church, chapel and remotely religious building is open for locals and tourists to have a closer look at these preserved treasures)... and Carmes it seems was enjoying a second 'Open House'... an extra opportunity for a chosen few. So we were very lucky to come across a group of people taking a glass of wine outside the church... It was a beautiful autumn day with no hint of the cold snap that would remind us that winter was just around the corner. We knew nothing more than what presented itself and, as we were walking with Rudy down the lane we were doing the 'Bonjour... Ille fait beau' routine, I drew the short straw and hung on to the dog whilst Micki went into the church to have a shufty and to take some photo's. I wandered further down the lane beaking into farmyards and the front gardens of enchanting cottages... I turned around as the ancient houses gave way to open countryside and walked back toward the disbanding group of visitors. The stalwarts were left folding up the trestles and chairs... Just as I arrived at the church door Micki emerged and said... "You've just got to have a look in here. It's just amazing!" Obviously I did and it was... An amazing experience... 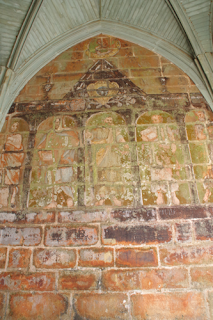 Having passed through the building being amazed by the stained glass and ornate ceilings I stumbled squinting out into the light... there were by then just 2 or 3 of the organisers of this small event packing up the hardware... So, when you are of a limited vocabulary you offer "C'est magnifique... tres beau, merci pour le opportunité... etcetera... "Would you like to follow me and have a look at  our piéce de resistance?"... offered our emerging new host - a silver haired man in his 70s. "Of course" we both said... "et la chiene?"... Rudy looked worried he might miss out... The keeper of the keys said it was no problem... so off we all went. We'd marvelled over the church interior... now for the extra revelation that lay treat behind the altar 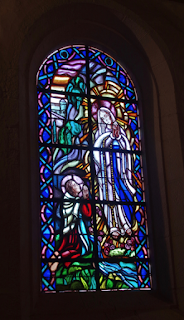 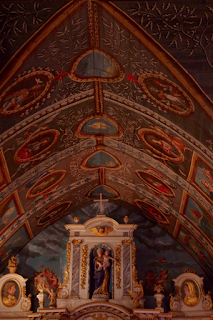 A winding staircase entered via a small gothic stone arched doorway to the rear of the building revealed, after about thirty stone steps, was a 10m x 6m room with wide planked flooring and soaring walls lined with wooden panels which must have come originally from the main body of the church... The wall paintings are from the 15th Century... and the removal of these from the naive enabled the existing church interior to be emblazoned with illuminations for the glory of God. The whole place is quite sensational... How lucky we were to take the decision to turn down this lane and take a look... I've no doubt we will return the next time we wander along the tow path toward Pontivy.

Each year each commune or church community across the whole of France holds what are known as 'pardons', a get together where funds are raised to support the outlying chapels of any village where the main church has soaked up a more mobile community...  These days those outlying hamlet chapels are not regularly used for regularly services. Some are grand affairs and some more humble. The chapel's upkeep needs a nudge now and again and the pardon process does the trick. Locally to us are three chapels and funds raised help with the buildings' maintenance needs. Ten Euros per head buys a ticket and local farmers donate their produce be it animal or vegetable free of charge. There is usually a baptism or two in the chapel before lunch and then the folk of the parish descend on the marquee decked out with trestles and benches with gingham cloths and bunting flapping gently on a warm July breeze. Four course partaken amidst a hubub of animated conversation... Some people don't get to the nearest town, the coast or even the local lake and this is one of their very few excursions!

When lunch has settled it is a live version of 'It's a Knockout' - with all manner of féte style fun and games and drinks at the bar... Some pardons extend into the evening with music and dancing... All in a very good cause. 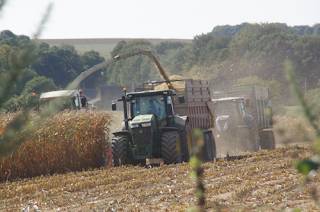 Brittany's a tough,, ramped up agricultural environment. Even the strimmer we bought from the local DIY shop turned out to be 'Commercial Strength', so it's not surprising that when the local farmers here set about the annual Maize harvest in late September or early October... they have to do it 'big style'. The fields are huge and the task is gigantic and hectare upon hectare for miles around here are planted with sweetcorn. I can't imagine how this task would have been completed before mechanical equipment came into everyday use. It pulls into perspective why there are so many farmsteads and tied cottages making up the thousands of hamlets and many hundred villages across the peninsula so that anything on this scale could be carried out with anything like the same precision manually. 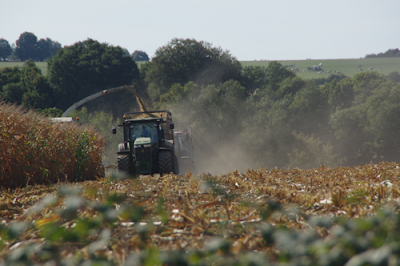 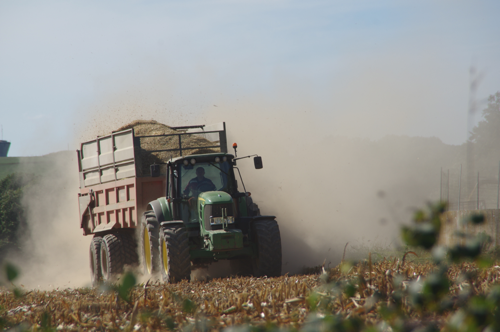 It's extremely rare to find fresh maize for sale in supermarkets as a commodity for human consumption ... It's just a big 'Non' from the natives  it seems (parsnips take on the same rarity value too). And the reason that all the fields of maize you'll see are dull russet and very uninviting is that the whole plant as it's sheared from the earth is, within a wink, shredded, stalk and all... into tiny pieces... Shredded to make flakes for animal feed. It rests for seconds within the combine before being blown in a tight streaming cloud through a chute and out into the air directly into a fast moving mobile bin the size of a shipping container. This is being towed behind a 'pumped up' tractor - the whole rig is a cross between a veloceraptor and something out of Transformers . The tractor follows the giant shredder in a ballet round and around the field in a clockwise direction as the crop diminishes noticeably in size... As the bin passes the half full mark another identical rig appears as if from nowhere and latches on to the rear of this mechanical hokey-cokey... Following close behind, the driver awaits his cue. The full bin peels away at a signal from the combine's 'pilot' and the empty one shimmies up to replace it in an instant. He hardly let's any drop... 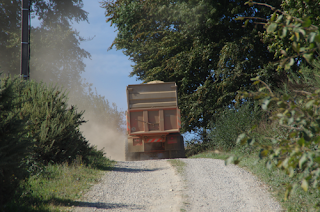 There's not a moment of hesitation. The full bin is hurried from the field and the rig heaves its way down narrow lanes (nothing can pass - even Cornwall can't compete with the narrowness of some round here)... off to the co-operative's silos to be weighed, logged and stored. Then it's straight back to the fray. This activity is being played out by dozens of teams across the Breton peninsula and the combine and tractor drivers are, for a month or so, the champions of the Bretagne Champs (fields).  They are obviously the same people who a month earlier take on the wheat for the flour mills... They are the cowboys, the plainsmen of Breton agriculture... They are the same harvesters who clear the fields of wheat, barley, oats, potatoes, carrots, cabbages, sprouts, oil seed rape... you name it they cut it!

This vulcanised dance marathon goes on from early morn - moving from field to field - and often through the night according to the weather forecast. Night time goings on, if you are lucky enough to see them are amazing. We're lucky. Right outside our back window is a 5 Hectare field and, when you're just about to turn in for the night it's a privilege to be able to stand at the window with an extra glass of wine or pommeau hooch and watch the late night moon-lit ballet begin where the daytime polka left off!