Life's a Beach... A Brittany Beach! 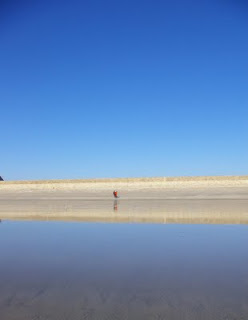 It's impossible to talk about the 1,780 amazing miles of Brittany's coastline (2,860km - hugely more than any other French region) without making initial comparisons with Britain’s own southern fringes.
The clue's in the name though as, in the mists of time, the two were, of course, joined with no beaches at all. So there's a distinct fascination, but little mystery, about why there is a mirror image in the topography between southern England and the north coast of Brittany. If you know the southern Cornish and Devon coasts then there is a definite de-ja-vu feeling when exploring the Emerald, Penthievre and Rose Granite coasts of Brittany. Initially it's all about rugged outcrops, creeks, inlets, hidden harbours and those long 'loping' sandy beaches; where cliff top walks are interspersed with quaint fishing villages. And where you are talking about specifically doesn't actually enter the balance until you add that fascinating 'abroad feel' that centuries of influence of the indigenous and developing culture which has made its indelible mark on the edges of the landscape.

Breton culture is responsible for the myth, legend and magic that springs from Brittany's coastline. Some readers may be surprised to learn that a section of the south west Bretagne coast bears the name ‘Cournaille’. So it's not hard to see the connection, however you may pronounce it. Add to this the similarities amongst the native languages of Wales, Cornwall and Brittany and you begin to recognise the influence of the Celtic swathe that extends further north, through Ireland & Scotland and south via the Basque and beyond.

The resorts and beaches of Brittany extend from the chic of Dinard in the northeast (this was often known as 'the English resort' because of its popularity with Edwardians - 'les Anglais'). Dinard, with its genteel striped beach tents stares in admiration across the bay toward the rugged and swash buckling St Malo, a departure point for so many explorers and merchant-venturers in the days when many still thought the earth was flat! Already we are seeing that it's often what goes on both on and beyond the beaches which fuels the fascination. Incidentally, when you get to look at St. Malo, bear in mind that during WWII it was bombed and shot to blazes as the Americans (well it was an American book that I read it in but I'm sur ethere were at least some Canadians and Brits in there too) took it back from the Germans. From a city in ruins in 1944 every brick and corner stone of it has been rebuilt to the exact original city plan that the original Privateers, Corsairs and Malouins - even Jacques Cartier would recognise it from. And a walk around the town's walls is a must.

West of Dinard the air of chic extends to other north coast resorts; Erquy (with 11 beaches) and Pleneuf Val Andre, where sophistication lives cheek by cheek with the 'life support' of Breton life...the fishing industry. Dahouet, as an example, sits right next door to Pleneuf and it's practical neighbour with its still very busy harbour has opened its heart (and its quayside seafood restaurants) to all comers, especially those interested in antiques too, as converted fishermen's net sheds punctuate the line of restaurants, offering brocante and antiquites. The marina offers shelter to the more modern leisure sailor and, it's Interesting too to note that berthing fees in Brittany are half the cost (or less) of those paid on England's south coast.

The shape of the coastline and the slow incline of the beaches to the west, in the Bay of St Brieuc, has given rise to the farming of mussels which, along with Crepes and Gallettes, are just 3 of Brittany’s famed culinary legacies. Thousands of rope-wound staves bristle from the beach at low tide where amphibious craft and tractors reap the harvest. At one particular cove... Jospinet, a restaurant on the slipway opens only at 6:30pm and, from April 1st to October 31st (except Tuesdays)... Moules & Huitres, with a choice of accompanying beer, wine or champagne is a must if you turn up for a walk on the beach at the right time.

To the west of St Brieuc, at Binic, is another vast beach, where an expanse of sand of ‘Norfolk’ or 'Morecombe' proportions, is a haven for the ‘pick your own’ brigade... especially when the low tide coincides with early Sunday afternoon...Slow to start, but an increasing band of would be shell fish collectors with nets, buckets, rakes, trowels and shovels - amble, cycle; some even drive - towing trailers...all meander down to the low water mark. For a while all is calm as those digging for anything that will complement Sunday after-noon’s repas, are absorbed in their task. It’s the turning of the tide which is worth sticking around for. As it advances at ‘a trot’ with the accumulated ‘mussel, cockle and oyster pickers’all rushing ahead of it - en masse - in true ‘Monsieur Hulot’ style! Catch it if you can... Further west is a landmark amongst beaches and coastlines as the coast of the Cormorants gives way to that of Rose Granite. The ‘sport’ here is in identifying famous faces amongst the profiles within the high rock formations. For Brits there is the added delight of there being both a ‘Margaret Thatcher’ and ‘HM The Queen’!
The Morlaix Estuary punctuates the northern coast with hidden bays & secret sands amongst the cliffs before it turns into Brittany’s own (chunkier than Corwall's land's end) the Crozon Peninsula; as both it (and Cornwall) offer that ‘fists clenched’ gesture toward the Atlantic and all it can throw at the land - as it enters La Manche (the English Channel). Even here there are delightful beaches that contradict the belief that Finistere is harsh and cold. Some of the best protected creeks provide sheltered beaches for the westernmost towns.

The ‘fingers’ of the Crozon eventually give way to the southern Finistere and Morbihan coast. Here, Douarnenez, Quimper, Concarneau and Benodet - God fearing and sea faring towns - where best use has been made of their tapering peninsula land (as do Penzance, St Ives, Falmouth and St Mawes in Cornwall) all mirror again quite nicely, whilst the Gulf Stream allows them an income; by hook or by crook - by sea and on land; like fishing, mussel farming and daffs in December.

By now the southern coast levels out and presents estuaries and inlets hiding bays, resorts and marinas all with ‘nature provided’ convenient beaches of all proportions. River estuaries are headed by riverside towns with history and there's heritage galore such as Pont l’Abbé with it’s own beach community at Loctudy, Benodet and Concarneau (Brittany's ancient sea port) with their busy marinas playing host to many motor sailers and their owners from the south coast of England as they cruise the Brittany coast each summer. A point of pilgrimage for many is Pont Aven, home to Gaugin before he headed off for Tahiti... And “no” the weather in Brittany isn’t what encouraged him to leave. The climate here is generally better than is enjoyed (or is it endured?) in the UK.
The last leg of the journey along the coast gives us gems such as Auray - I always think it’s like an Arundel by the sea! Or maybe Auray's just nearer the sea.

For me... the coast from here, until it merges into the Loire Atlantique, is probably saving the the best till last...because there is Lorient with its own ‘seaside’ town, Lamor Plage with chic beaches and cafés - you'd be forgiven for thinking you were in teh south of France rather than the south of Brittany. And to the east of Lorient is a feature which (carrying on that mirroring the British coast theme) resembles Chesil Beach in Dorset where a slowly curving beach (‘spot the other person on the beach’ is a game you can play all day here) as it reaches out to join Quiberon to the mainland. A year or so ago we found ourselves on the beach near a large village (small town) called Gavres. It was (I know there will be some who will argue this)... a warm day in January... not a soul shared the beach with us. Come to think of it - it could have been those gates we drove through and the signs which I think said something about a rocket firing range... But I digress. As I said - It reminded me of the view along Chesil Beach from Abbotsbury looking toward Portland Bill. Here it was from Gavres to Quiberon. And I can thoroughly recommend the place...although, don't come looking for me if you are arrested - or pick up a dose of radiation sickness! From here we drove on to have a look at Quiberon itself.

Now, in January on that warm and sunny day Quiberon was heaving. All the cafés were open and doing good business. The benches that line the promenade were all taken with people sunbathing... OK some had coats on - but it was warm and the beach was busy with families getting in some early frisbee and football practise. It was wonderful. In July it might just be tad too busy - but I'll be happy to give it a try if I'm down that way.

Next along the coast is Carnac. Now there is definitely something going on here! There are 4,000 Neolithic standing stones. Some say they are a Roman legion turned to stone by Merlin. Personally I'd dispute that... I'm no history buff but - weren't the Neolithic times a bit before the Romans? Another story goes that the stones were placed there by successive generations in memory of their loved ones. Now that's a bit more like it! I guess toward the end of that period though we should expect to find some with chiselled tributes. But whatever the truth is about those that worked so hard to place them there they must have been driven by a powerful belief because some of those stones look heavy. Of course there are those who think that Carnac's stones are a landing field for extra terrestrial craft (but this is promoted by what I call the knit your own yoghurt brigade. And you won't get me on that one. And anyway the stones would just play havoc with your undercarriage!

Now that I am getting into this Blogging lark I will be doing more and maybe... for next time I will be visiting, researching and reporting on the big one...one of the most interesting areas of coastal Brittany - The Gulf of Morbihan...