Animals Around the House

They think they own the place! And often spend longer around the house than we do. Some of them even make it inside and don't want to leave... I'm talking about animals at our place in Brittany... We've had most species come to stay... Obviously there are cats and dogs. That's a given. Several generations of feral cats have been born in the barns... When the kittens have ventured out for the first time I have seen birds of prey doing a reccy swoop through the courtyard so they have been ushered back to their mum's safe keeping. Too dumb to know - too young to die! And next door's dogs treat our place like an extension of their own 'manor'...but there are also Barn Owls, Pheasants, Buzzards, Sparrow Hawks...

Regarding the sparrow hawks...at breakfast one morning, Graham, a guest and something of a twitcher, spluttered into his cereal when he saw one swoop in and settle on one of the roof bars of the truck... He rushed off to get his camera before the bird should fly away again and, by the time he got back - there were two! And, of course, there have been a host of the usual suspects covered by the term 'garden birds'... There's also that pigeon - the one from central casting that always seems to be in shot, right on cue and crosses just about every vista... also a trio of doves that turned up for a week and have not been seen again. Mice (no rats, so far, that would be worrying)... a vole. The vole episode was brilliant. It was after supper one evening... just the two of us and we were washing up, admittedly the lighting was a bit subdued - I must fix the downlighters in the kitchen - they cut in and out as the temperature rises in the boxed in space above them. So, I'm drying and Micki is washing and, as she swings with a glass across me and on toward the drying rack, some water splashed on to the floor. I took little notice of it until I caught some movement out of the corner of my eye. I turned to look and there on the tiles, lapping water from the 'pool' that has been splashed there... I thought initially it was a mouse, is the sweetest little thing. I carefully did the 'spider' glass and card routine without it even noticing... letting me ease the glass over and down and slide a coaster underneath it. It even shuffled its feet gently and stepped up as the card closed across the mouth of the glass. I set it down on the table whilst I finished the drying up and it sat there quite happily gazing around squinting toward the lamp above. Like an idiot I went to all the trouble of taking the glass, vole and pub drip-mat ensemble out into the garden in semi darkeness by now and let it go without taking a commemorative photo. Arghhhhh! What luck then that the following morning he/she should still be hanging around long enough to pose. Unbelievable! Snakes:- grass snakes and once or twice an adder have all made appearances - but the mower does tend to make a mess of them; they don't seem to hear or, if they do - they don't think it poses a threat to them! 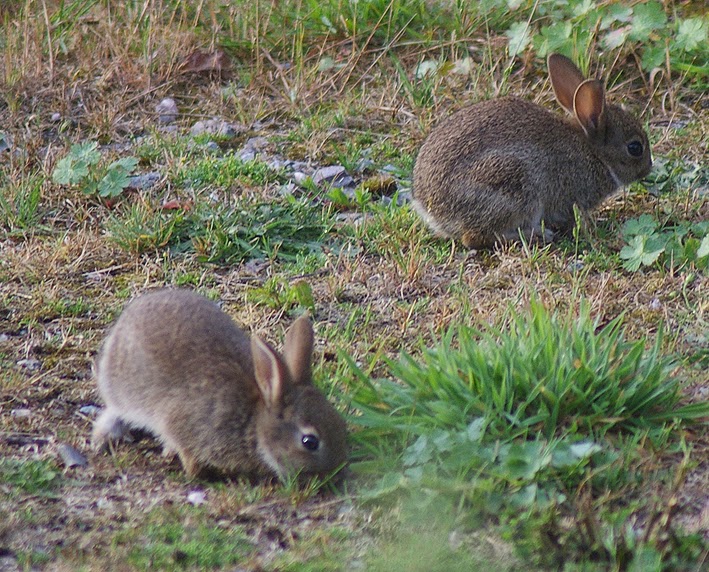 Rabbits, usually very early in the morning (there's a warren in the trees behind the trap barn)... a horse OK, so it belongs to the neighbours, but they're not big on fencing and, for 'Flamenco', the grass is definitely greener on our side of the fence... Sheep and goats - that's the lack of fencing again...

There was one particular late summer evening when Micki, who had been working particularly hard in the garden, was beating the bounds with a glass of wine in her hand after our evening meal... checking that all had been left shipshape...Rounding the corner behind the trap barn she was startled, confronted by a total of 12 sheep and goats all feeding voraciously on whatever they could munch through before the 'lady who works in the garden' (nudge, nudge) might turn up and spoil their fun. She was apoplectic, suddenly letting out a shriek and throwing her by then empty glass toward a bush for a soft landing and began a run toward the collective flock arms outstretched hurling well turned expletives which worked a treat on the animals.... as well as on our neighbour and her eldest boy who were studying the onion crop in their vegetable garden. Laurence, realising there was trouble brewing approached smiling a little awkwardly and crossed the broken down fence and went through the kissing routine that is obligatory in Brittany - 3 times on each cheek I think on occasions of extreme concern... and all the time effusing about how nice it was to see us because I'm there by now having heard the commotion - how are the family etc., The sheep and goats trotted back across the threshold into their own compound and the conversation ended more or less amicably but avoiding the obvious. The next time we had aperatifs together on a subsequent visit the goats/sheep had been replaced by Flamenco the pony, an all together different potential animal problem... More about that another day maybe . But it has been said that our neighbours have a preference for friendly neighbours over runaway goats and sheep. But then, just a decent fence would probably have done!  The only reason that cows haven't been in, around or through our place is because there is always a piece of blue plastic twine strung across our drive whenever a herd passes by on their way up the lane to their pasture after milking. A doe Fallow Deer careered through the courtyard once closely followed by two scraggy looking hunting dogs who somehow found it more difficult to get through the undergrowth on the way out than the deer did. I love it when the underdog scores. The following morning a bloke dressed in what goes for hunters' apparel... parka, forage cap and a wine bottle in each coat pocket, turned up looking for his dogs. Did you know... that a hunter's dogs are 'allowed' to cross your plot...but the hunters are not. 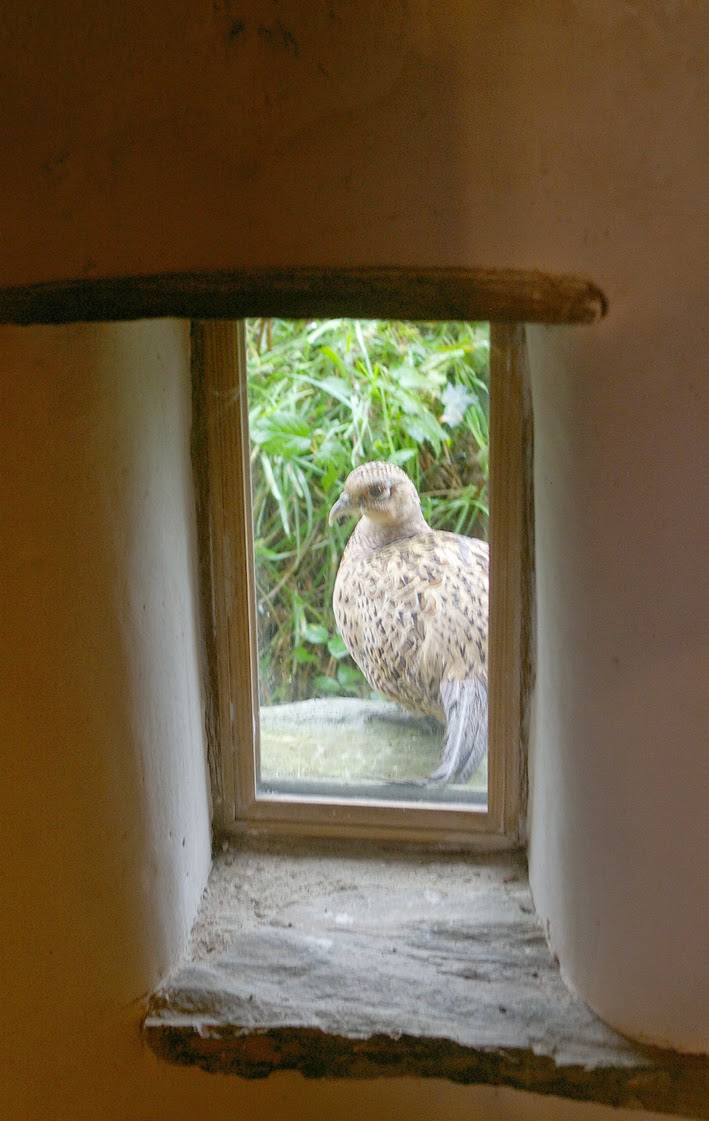 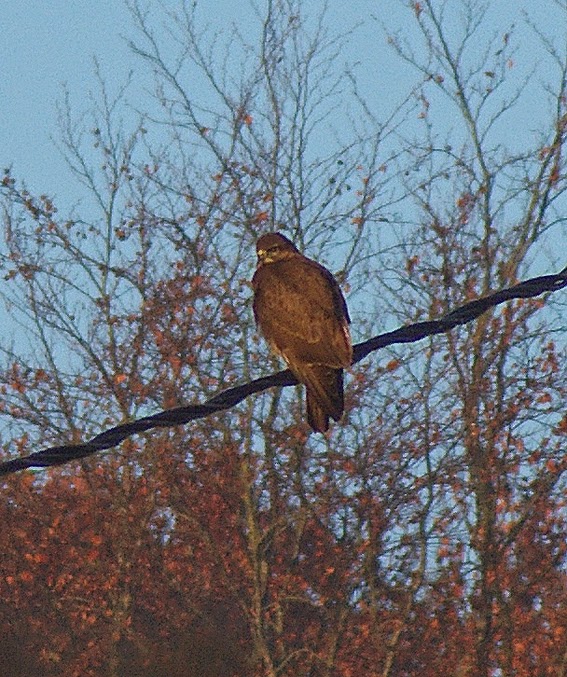 Although there are proper, organised hunts, in the forests it's not all hunting pink round our way - and anyway, from what I've seen, the standard colour for the posh lot, at least in Brittany, is green. It cheers me up to think that the deer that I only caught a glimpse of, ahead of the dogs, probably got away.

One winter's morning, just after Christmas, we were out for a walk on the hour long 'hairpin walk' along the Rigole, up the valley and back and, as we were descending the hill that links the rigole to the lane beside the mighty River Oust (but more of a stream as it passes our place)... hunting horn blasts that had been very distant when we started out sounded again, but this time very close by, and as the echo died away a fox leapt from cover to our left and stood stock still looking terrified in our path. We must have seemed more of a threat than the fella with the bugle and, confused, because it ignored the open field to our right, it dodged back the way it had come. Thirty seconds later there was a volley of shotgun blasts and, by the time we got back to the house we saw one of the hunters wearing its body round his shoulders. Later still, on walk number two of the day, we passed Jean Noel's pig bin - and there was the fox's body minus its brush! Trophy or proof of death for a bounty from the Mairie, I don't know - but with all the intensive (indoor) farming that goes on in the area, they have a hard life... and an even harder death! 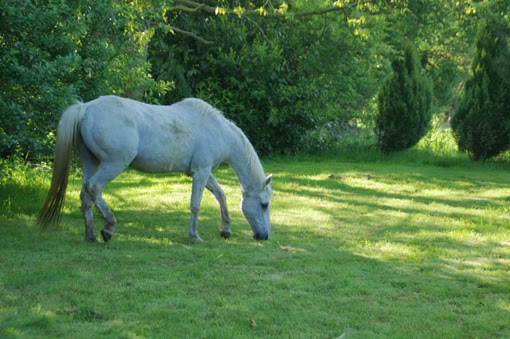 There have also been two old ladies who, when we got back from a sortie to the bank, LeClerc and the dechetterie, were sitting on the magic bench... They were obviously quite embarrassed and asked us if the lady who they knew had lived there, an old friend, was still at the house. They must have been really close as she had passed away at least 15 years earlier! They said that they were just out for a walk and had got tired, so thought they would look up an old friend! We offered them tea but they declined and I then asked if they would like a lift back to the village but, possibly embarrassed at being caught on the premises, they said 'non merci' to that too and wandered off. Shame. I wish I had photographed them too - that would have been brilliant. 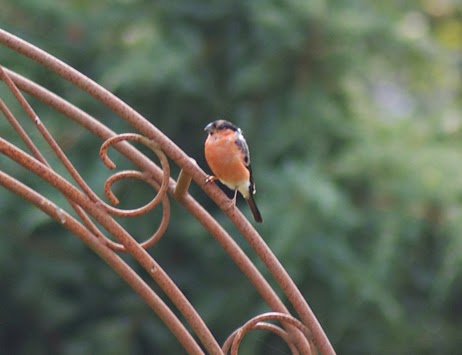 Of humankind we have also been visited by a man in a big van full of chairs (not the usual door-to-door commodity)... "Do you need any chairs?... he asked, as casually as if he were a milkman offering a couple of pints. We didn't! "See you in a couple of years then he said as he climbed back on board. We haven't seen him since - but we still don't need any...
Earlier during our ownership of Le Roz two 'Peruvian' ladies wearing ponchos and bowler hats (that was the clue) turned up wishing to know if we had any old car batteries. Now that struck me as a cover for something a bit more sinister. I think if we hadn't been there they would have moved in and we would have found them in residence with the rest of their extended family when next arriving from St Malo.

There is no doubt that Le Roz is a charmed environment... spookily charming! I could go on...
More another day... 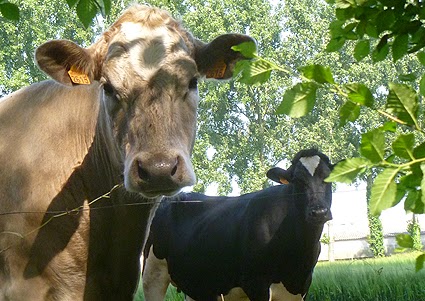