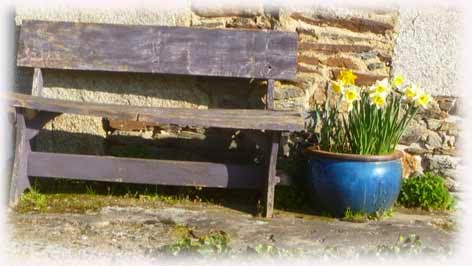 I must get around to doing 'write ups'... blogs etc., more often. The trouble is there's always something that diverts the attention. If it's not renovating the house in Brittany or juggling bits on the Brittany or Normandy websites (whether here or there) then it's fiddling about and snagging on the house in England in the hope that we may sell it, downsize and spend more time in Brittany...Brilliant!

Mention has been made recently on our FaceBook page https://www.facebook.com/AHouseInBrittany ...of the 'magic bench', an old oak job, painted 'flaking purple - slightly wearing thin look'. We picked it up from a house clearance we did (more about this another time) during a house sale transaction that fell apart. The bench is like Trigger's broom... It's had several new seats and two new backs but has lasted for years through wind, blazing summers, rain, frost and snow and performed quite magically for 13 years. It sits at the top of steps from the garden, just outside the kitchen/dining room doors. There's a quick explanation as to what makes it magic. But, as usual with me, there's also a much longer story to tell. The quick thing... and we had never been certain why the bench became the place of choice when events call for a tea break, snack time perch or wind down spot for a beer as an escape from renovation works as the sun goes down... It's best explained by relating one of the first occasions it was in its position overlooking the courtyard. We were having a cup of tea there and, after a long and inexplicable silence, where the two of us were just soaking up the atmosphere and, I suppose - daydreaming... Micki said, "Do you know?... I feel totally peculiar. I can't explain... sort of heavy limbed... as if I can't be bothered to get up"... long silence... "Could that be described more simply as relaxed", I suggested. "Maybe, of course... Yeah, but it's more than that...

Everywhere at Le Roz is great; has a very special feeling, and has an unexplained serenity. Even the neighbours, when I have said that I thought it was a 'special' and enchanting place, have agreed with enthusiasm. They have even said that when they have walked through our garden with relatives (cheeky buggers!!) after having Sunday lunch round at their place, that there have been 'sightings' as they walked past the lounge window...That the old lady was around! Anyway for us the bench, since that time, has become the place to go to relax. Old lady or not... It's a good place to feel not just relaxed but almost as if drugged! Don't ask me how I know.


But to understand why is explained by the longer story...
Our job in operating www.ahouseinbrittany.com and www.ahouseinnormandy.com involves receiving property photographs and written details from agents with whom we work across Brittany and Normandy and posting them on the site to be discovered by like minded people to us who want to jump ship from the UK and set themselves up on the other side of the channel. The buying of our house for just £12,000, 17 years ago, via a 'string-bag' agency system that didn't really even deserve to be called either 'agency' or 'system', started us off in a business with the aim of straightening out the procedure that has now become a very well trodden path for clients of many much improved  businesses just like ours.


An English agent, Jonathan Biggs (hi JB), with whom we worked sent Micki some photographs of a property due to be placed on our books. There was something not straightforward about the photo's. A couple of them had blur marks and blemishes.
Micki and I work in adjacent rooms at home in Worthing and I could overhear her saying... "What? You mean there isn't a white mark on the beam above the table? Well what about the thing that looks like the blurred wings of a white bird coming from the fireplace? Looks like a dove." Of course I asked her later what it was all about. She said that talking about the aberations within the property photographs had led to her telling him about (and saying she would send him) photographs which she had taken of friends who had stayed with us at the house where things were indistinct and blurred on the print when nothing at all had seemed untoward in the room at the time that the shot was taken.


Jonathan, it transpired, is a medium. And, on receiving the photograph he had immediately been able to read something into it. But rather than tell us hidden secrets about our property he reeled off a load of facts about our house guests and what was going on in their lives... with some remarkable pieces of accurate information the traits of both and of some now treasured posessions that had belonged to their daughter who had died a year earlier on the other side of the world, in New Zealand... His knowledge of occurrences in their lives was uncanny.


Often we go for years without meeting the agents that we work with. But here was a mutual interest in us meeting with him. I had already told him about the day my dad had passed away on a day when we were traveling from Portsmouth to St Malo and my old man had let us know during that crossing and on our arrival at the house that he could stay in touch from 'the other side'. So, when Jonathan was in our area of the Cotes d'Armor to do a valuation, we suggested he should drop in at our place for a cup of tea. So it was then, that we were sitting at our dining room table talking about these happenings and other things...


"I get the feeling that this is a house where there have been a lot of women and very few, if ever any, men"... he said. Well, we already knew something about this. The ruin of a building at the end of our courtyard had apparently been used as a school for children from all of the neighbouring hamlets. It seems our house had been the focal point for this small area and would explain why our house had a separate bread oven at the back of what we call the 'baby barn'. And when we had asked our neighbour, Jean-Noel, about this and we had asked also who might have run the school, he had said quite matter of factly. "Sisters". So, that might have explained the lack of a man about the house apart from maybe a visiting clergyman. "And"... Jonathan said, "there are a few of them bustling past behind me right now. "But, the biggest presence I am getting is by the fireplace in the lounge". I'm guessing this shouldn't be a surprise - in places like Brittany most people hang around their fireplace from October through to March. Jean Noel's grandma had owned his own house (a rather grand looking Linen Merchant's house from 1763) and her parents before that, so knowledge stretching back 150 years here wasn't a surprise to him. Before leaving, Jonathan walked around the garden with us and, as we passed the open entrance to the baby barn, I asked if he felt anything about the building. Without knowing anything of its history he said it felt 'hallowed'. Micki and I had thought right from the time we first arrived at the house that the baby barn had both a chapel look and feel. but as Jonathan was about to get into his car he stopped and said... "hang on a minute". He took from his pocket a silver chain with a piece of turquoise clasped in a silver mount and moved toward the steps which ran up to a flat terrace in front of the kitchen door. As he did so he was saying... "I think there is treasure buried here... Now by that I don't mean that it has exceptional value but it might mean a great deal and was very special to the person who buried it". He dowsed with his chain and began moving slowly from one spot to another to verify the correct position and when he finally stopped with his chain ramrod straight and pointing to the ground - he was in a direct line between the baby barn and the spot where our 'magic bench' now rests. Maybe this explains why we glaze over when we sit on the bench to take a break, have a cup of tea or eat lunch - it's very close to where this 'treasure' is buried. I'm a bit of a romantic (can you tell?) and I think that the buried treasure might just be altar furniture... a box with crucifix and candles. The nuns who ran the school and lived in our house used the small barn as their chapel...


History has shown there to have been religious intolerance because of the rise of the Huguenots who fiercely promoted French Protestantism which may have been good reason to hide the devotions and the trappings of Catholic worship in Brittany.
At some point it may be relevant to find out if the theory of the magic bench is true. I have recently bought a metal detector in order to find the spot that Jonathan's chain hovered over. Maybe when the house is completely finished and that final touch - sponsored by a lottery win which I'm always sure is just round the corner... there will be a topping of proper cobble stones across the courtyard, then, before the area is covered irrevocably. I'm just hoping it doesn't upset the equilibrium of the 'magic bench'.
By the way... as an update... Still waiting!