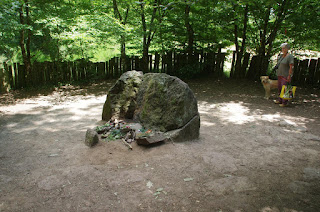 For a bloke who was restricted to travel on horseback or, at best, but probably a whole lot slower, by Palanquin (look it up... I had to) King Arthur and his retinue (Lancelot, Guinevere, The Lady Vivien, Sir Girwain, Merlin - et al)... well, they sure did get around. Although, if you believe the other places that legend would have us believe he made an appearance - as I mention in the title... Tintagel, Snowdonia, and Cadbury Camp, then he was probably good at levitation and teleportation too... He probably landed just up the road from here having been guided in by the standing stones at Carnac. And don't get me going on "was God an astronaut!?"
We're getting on with our exploration of Brittany (picking up again nicely thanks) in between renovating our modest money pit in the Cotes d'Armor... Well, we recently had a look at the forest of Broceliande... and the Brittany end of the Arthurian legend. 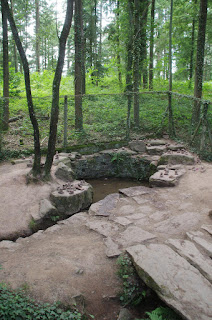 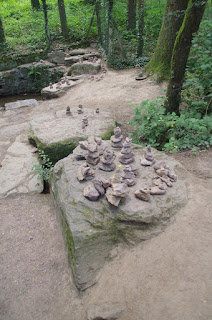 I have to say that, with regard to this part of ancient history, the Bretons aren't known for over-egging their potential tourist attractions. In fact it's quite a task linking together all aspects of the legend in this Celtic toehold within France... because they are fairly laid back about the whole thing over here. It's a patchy and not heavily patronised tourist trail. It's a bit like being interested in International Grand Prix motor racing or the World Cup... better, most would say, in documentary film form or viewed on TV rather than traveling to each venue in real time bearing in mind the expense and time invested in actally 'being there'. The Bretons play it very low key. Good on 'em! 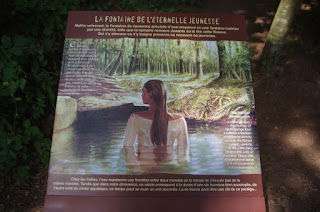 Paimpont, being probably the biggest community in the area, has a street of mainly tasteful commercial premises, cafés and gift shops where only some have a touch of the mysterious about them. The street presents a relatively calm environment, neatly tucked away, but accessed via an ancient arch off the main road that runs straight through the town. This in turn leads to a very handsome Abbey church... Parking is free and plentiful and the Abbey sits next to a large lake... Yes, probably... the one of which there is... a lady and, on the shores of which there is the rumour of a sword in a stone!
Having seen all that Paimpont seemed to have to offer we had lunch of Moules and Frites and headed off in search of evidence of Merlin. The low key approach that Breton local authorities attach to this kind of thing (OK there are road signs and we knew that all was to be found here within the Forest of Broceliande) is very low profile. After a few wrong turnings (I always blame it on the satnav) we saw, just ahead of us a lay-by with maybe 6 or so vehicles parked up... Across the lane was a dusty track leading into the woods. A sign board illustrated with a wizardly theme and multi lingual descriptions of what was to come... Excited? Expectant at least! Quite a few people (there must be another car park) were in front and behind us on the well trodden path... Stopping and politely waiting for each clutch of legend seekers to read the information board which might sit in front of what on a better day (today was parched in July with beige grass) had once been green and offered no trace of water in the culverts which might on other days have gushed, bubbling, toward the 'font' which we discovered further down the track... The actual 'Merlin's Tomb' consisted of three large rocks buried in the earth down a side track to the right and the only thing that distinguished them from other rocks that we could have seen just as easily in the same area was that people had laid flowers and small piles of stones on this the 'real' tomb. Further down the path on left and right were more tributes of piles of stones and just as identifiable... the places from where these stones had been prised, dug or kicked from the sides of the path. The Fountain and what might well have been a secret pool were dried up but dignified by more piles of stones. 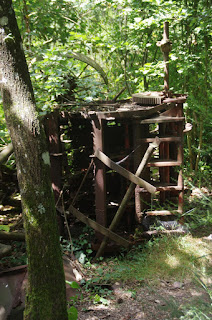 The walk back up the track revealed something which I'm ashamed to say I found a mite more interesting ... a piece19th Century rusting iron farm machinery (I'm not an expert) which was locked into the landscape by trees which have grown around the stranded vehicle. An antique combined harvester or was it a chariot of the Gods?... Anyway...frozen in time!... 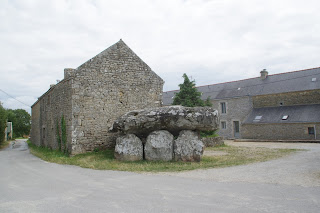 Continuing our drive we came across other burial chambers, menhirs and dolmen just off to the sides of the road... some huge by comparison that would, if anyone had thought of being slightly dishonest about local heritage, could have proved much more interesting and intricate for the local Marie in days gone by to have decided..."OK, let's say this is Merlin's tomb! Much more plausible! OK... if you agree, let's put the signs up and lay out the car park!"

But, why mess with true heritage? We had a great day out. We've actually got a cluster of rocks behind the barns in our own Brittany garden - behind the 'money pit' (I jest of course) that rival Merlin's tomb for their size and intricacy and so I'm picking up a sheet of 8x4 marine ply and a couple of timber posts next week and will be advertising (discreetly of course) the secrets of middle earth... "Bury that hose pipe in the ground here we're going to need a water feature... Here we go...Welcome to the Grotto!"