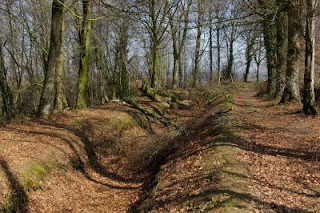 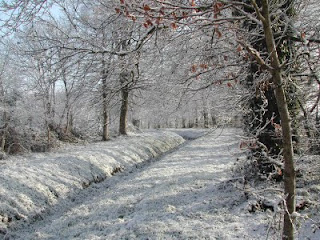 Our house in Brittany is very near to the Rigole d'Hilvern. It's a 'cut'... a mini canal if you like. But it hasn't been navigated by any boats. Our neighbour did tell me though, that when he was a boy, he and his dad regularly caught Pike at the top of the lane. And, even though it winds for 62.5 kilometers (only 25 or so as the crow flies) it has no locks (as a feat of engineering - it drops just 3mm in height for every 10 metres of its length) and these days not much of its length holds water Many of the pedestrian bridges that cross it have rotted away leaving just the stone buttresses, pillars and iron railings. But it still manages to attract thousands of walkers and riders every year, both equine, pedal powered (and occasionally our neighbour on his trials bike) via hundreds of access points as it winds its way under roads and tracks past hamlets and villages between Lake Bosmeliac and Hilvern near to Pontivy (Napoleon's northern Garrison town) where it joins the Nantes Brest Canal and the River Blavet.
The digging of the Rigole provided work for the 10 years between 1828 and 1838 for redundant linen workers; those left high and dry when their industry's biggest customer, the French Navy, upgraded from sail to steam. I often speculate about what life must have been like at our place whilst the digging team worked their way slowly past, dropping down the hill a couple of hundred metres to draw water from our well, buy cider and eggs or to use the bread oven to bake dough which they might bring to work with them. Being good citizens of Napoleon they also planted trees as they worked, ensuring that future generations (as well as Boney's army) might also walk in the shade.There are plans in place to lay a track of crushed and pounded stone along one side of the Rigole. All part, no doubt, of making sure that as many people as might wish to can make full use of what has become a popular (if sometimes overgrown) amenity. We are yet to be convinced that this will be an improvement. The existing grass 'tow paths' may need mowing three or four times a year by whichever commune's works department they are passing through - but maybe the added awareness for the facility will also mean that more vehicles than just the two tractors a day that pass the end of our drive will mean trippers, picnickers, hot dog vans, a car park... I'm joking of course. At least I hope I am!
The original need for the Rigole has long passed. Originally it kept the Nantes Brest canal topped up with water when low levels needed a lift. Napoleon first decided that the main canal should be constructed to move goods without exposing them to plunder by the English fleets that controlled the seas around the 700 miles of Brittany's coastline. So, you see it was all the fault of 'les Anglais' and Napoleon's key adversary, Nelson, in the first place... that the Nantes Brest canal was excavated. And so, if the place gets too busy we've only got ourselves to blame!

Hot off the Press! With enormous help from Brussels - so thanks all you UK tax payers - the Rigole is being given a face lift... The tow-path on one side of its entire 60+ kilometers is being 'paved' (actually with a top layer of crushed stone) to allow a greater number of cyclists and walkers (not to mention wheelchairs and baby buggy users) to enjoy the facility. We walk or cycle a couple of miles along the rigole as often as we can. It opens up such a wealth of 'extra'... whether that is just access to otherwise hidden hamlets or to collect the fallen boughs and branches to keep our winter fuel costs down... It's especially good for keeping an eye on the wildlife you won't find near to roads... deer, foxes, badgers and wild boar. With typical French efficiency many trees have been removed, doctored or planted to ensure that the rigole lasts for another hundred and fifty years.
at December 09, 2009